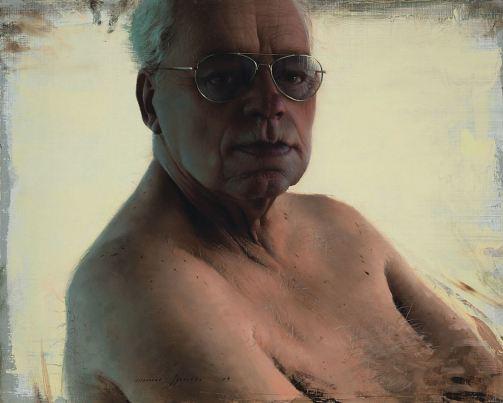 A review on the Denver Art Museum’s Exhibit “Fictions” by Artist Daniel Sprick.

I remember wandering into the Denver Art museum and stumbling upon Daniel Sprick’s work. Previously I only heard rumors about this kind of magnificence. A friend of mine, Tom T., posed for one of Daniel Sprick’s paintings. Sprick’s 33 piece series was presented in a professional museum format. The pieces extend over a period of 4 years. I’ve seen this exhibit multiple times, and I fell in love with it the first time. The creativity, the bold use of color, the technical skill, and the awe. The theme of the show was death. The yellow in the backgrounds is reminiscent of the white light. The chosen work, “Tom T.” is exemplary of his style because it includes all of the elements of his theme.

Daniel Sprick is formally a Hyper realist oil painter who’s famous for his still-lives. In his recent exhibition, we see his take on figurative portraiture. The style of the artwork is reminiscent of the photorealist movement of the 70’s; a reaction to Abstract expressionism, and Daniel Sprick is a considered a “core” photo-realist, meaning he is one of the original photo-realists. Photo-realism is defined by the use of a camera, a way to transfer the photograph, and the technical skill to replicate the image, including the lens aberrations of the original photo. But Sprick does not use photography, nor is he replicating an image to 100% of its likeness.

The same painting techniques that are used in Photo-Realism, are also used in Hyper-Realism. Hyper Realism goes a step further by modifying necessary and unnecessary details. This series of artwork could arguably be deemed hyper-realist. Though I’d like to think its part of the metamodern classical revival. Sprick uses the traditional “atelier” method . Sprick exaggerates the subject using traditional figure painting proportions, his figures are 7-9 heads tall, his neck lengths are almost unreal. He removes and extends limbs at will.

Tom T. at the Birdseed collective

First the figure is worked to its finest detail with oil paints. Then the backgrounds are added in; because the background color fades into the foreground. The colors he uses are not accurate “true” skin tones, but the way the colors complement each other makes the figure appear photographic(but not photo-realist by definition). The work has a central composition; it’s static. What leads our eye across the piece is the attention to detail, and the unique approach to the figure. The artist painted towards the edge of the painting. The facial hairs are done in clean, defined, singular brush strokes. The eyes are worked heavily, with attention to the smallest of details. The flesh itself, is made from carefully “crafted” skin tones, which appear to be a variety non-earthy colors such as, lemon yellow, ivory white, misty blue, cadmium orange, cadmium green, cadmium yellow, pthalo turquoise, and french ultramarine. He left imperfections in the background, such as small hints of another tone of cadmium yellow+titanium white.

Daniel Sprick might be the greatest painter who ever lived.

The History of the Camera: Photo-realism and its Origins

55 Tips for the Emerging Artist

How to Paint Like the Old Masters in 4 Steps

I ordered a custom painting of my husband riding his horse as a surprise anniversary gift. I cannot express how happy he was when he saw it. Cedric did an excellent job!