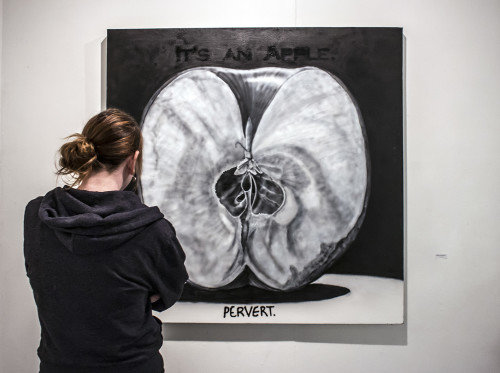 The Subjective Perversion of Art

"What is perversion? It is not simply an aberration in relation to social criteria, an anomaly contrary to good morals, although this register is not absent, nor is it an atypicality according to natural criteria, namely that it more or less derogates from the reproductive finality of the sexual union. It is something else in its very structure." - Lacan

A perversion is not necessarily sexual. Jouissance is a word that describes pleasure in terms of sexual gratification. Psycho-analysts have different definitions of perversion. In the quote above, Lacan argues that the act of perversion is found in structure and not in nature. The “pervert” knows the structure of the law, and knows what the expectations/norms of society are. But rather than accept the norms, the pervert makes their own desire the norm. The pervert assumes that the will-to-drive is not of their own accord, but of that of the “other”. A perversion is taking a structure, and knowing very well what it is supposed to be, then seeing it as something else, and blaming someone else for seeing it that way.

The verb “pervert”, means to “lead astray”, or “to misdirect”. An alcoholic drinks so they may avoid the pain of facing up to, and owning their own failures, to avoid taking responsibility for their own lives. Hence, alcoholism is a perversion, it leads the subject away from facing the true aim of dealing with their own guilt, and places the subject directly into a state of Jouissance, an illusionary well-being.

According to Jean Clavreul, "As far as the pervert is concerned, this conflict [between desire and law] is resolved by making desire the law of his acts."

I approached the subject as something familiar yet unknown. We often attach meanings to things that really don’t have meaning. Symbolism is the most common perversion. When we view the “apple”, it was never meant to be interpreted as a sexual object. I painted the subject with careful attention to the realistic qualities of an apple. The viewer sees a sexual object, the mind leads the viewer astray from correctly interpreting what’s really there. Then pushes all responsibility for their subjective guilt onto  "the other”, in this case the artist.