Orientalists are famous for their scholarly portrayals of the non-west. According to the Guardian, "Jean-Léon Gérôme's painting The Snake Charmer is a sleazy imperialist vision of the east. A group of men sit on the ground watching a nude snake charmer, draped with a slithering phallic python, in front of glittering Islamic tiles that make the painting shimmer with blue and silver." Orientalism is the critique of European's whom specialize as experts in the non-west. Their stereotypical portrayals of the east are often exaggerated or even fabricated. That's not to say that there aren't snake charmers in India, or Pyramids in Egypt. It's to say that there aren't as many snake charmers in India, and the ones that exist today likely exist within the realm of tourism. Right next to the Great Pyramids of Egypt, is a multi-lane highway and the city of Cairo, which are conveniently excluded from photos and movies. In the movie Transformers: Revenge of the Fallen, it is interesting to note that the battle scenes taking place on the Great Pyramid excludes the city entirely. As displayed in media, art, and popular culture, orientalism is the “Western artistic and scholarly portrayal of the non-West”.[1] 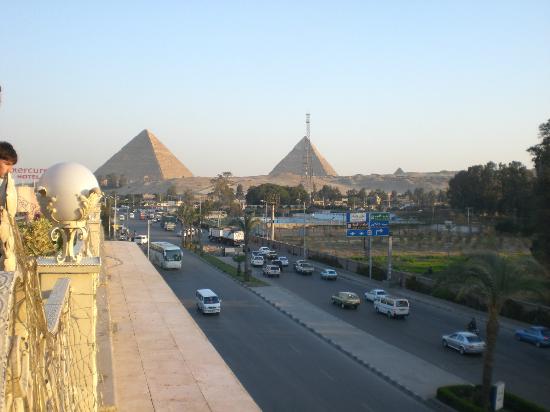 Timothy Mitchell describes a visit from the Egyptian delegation to the Stockholm Orientalist conference in Paris. “The Egyptian exhibit had been built by the French to represent a street in medieval Cairo, made of houses with overhanging upper stories and a mosque like that of Qaitbay.” Frenchmen were dressed as ‘orientals’, the street was decorated with bazaars, and the French organizers even imported fifty donkeys that the public could ride on. A cafe was decorated as a Mosque, where Frenchmen could watch belly dancers from within. Nothing in Mitchell's scene was authentic except the donkeys; one does not normally see a belly dancer in a Mosque.

The perfect example of Orientalism operating in contemporary society is embodied within the Bible itself. The original texts were written in three languages, 300 years after it happened, then translated into other languages, some books were removed, others were mistranslated, deviated, modified and some parts were simply made up.[2] The Roman empire stretched throughout multiple continents; and a religion founded in the ‘orient’ is likely to involve ethnicities other than Anglo-Saxon. Christ is depicted as a hyper sexualized white, blonde haired, blue eyed, bearded male, an embodiment of the Western Canon of Beauty. The bible is often compared to the religions of other continents.[3] The interpretations of the ‘text’ continue to adapt, as to no longer resemble the original ‘mistranslations’.

This is an interesting irony, and something that I do not wholeheartedly agree with. I am posing this comparison simply to point out something which is not directly observable. In the complete contradiction to the standard religion. The Satanic Bible preaches progress, it promotes Women’s rights, it supports gay rights, it promotes vegetarianism, and it’s the only religion formally against rape and incest.[8] The Satanic Bible is the complete opposite of the Judaeo-Christian sects. The progressive laws that Americans are making towards women's rights and gay rights, can be interpreted, literally, as the work of the devil. By this example, the ‘Islam extremists’ are well within their own own beliefs, and the Westboro Baptist Church are well within their own beliefs, and the Satan worshipers are well within their own beliefs, to call America the Devil.

Orientalism is the epistemological distinction made between the orient and the West.[12] Shelina Janmohamed questioned westerners in her piece for Al Jazeera News; what is wrong with the veil?[13] Posing the question, what makes the Western way of life better than the Eastern way of life? Iranian artist, photographer and filmmaker Shirin Neshat was sent to the United States in 1974 to complete her education. She was prevented from returning to Iran for over 20 years due to the 1979 Iranian Revolution.[14] Living in exile, Neshat plays with the Western perspective of the East(Orientalism). Similarly, Neshat’s photographic series titled Women of Allah which portrays veiled women wearing traditional Muslim attire, and written on various parts of their bodies are words written in Farsi. Western spectators would associate the words written on the figures with that from the book of Islam. Calling into question women's rights and equality across the globe. 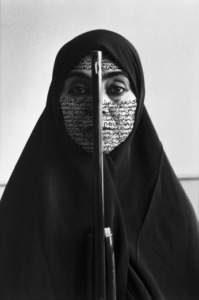 Ironically, the words written on Neshat's figures are utterly meaningless. "From the beginning I made a decision that this work was not going to be about me or my opinions on the subject. I put myself in a place of asking questions but never answering them. The main question and curiosity, however, was being a woman in Islam."[15] In Shirin Neshat’s film adaption of Iranian Novelist Shahrnush Parsipur "Women without Men: A Novel of Modern Iran", Neshat makes it a point to recognize that the United States is partly responsible for the turmoil in Iran.[16][17]

...I found it very timely to revisit history and remind Westerners that the American and British governments were directly responsible for overthrowing a democratic system in Iran. The CIA organized the coup in 1953, which in turn paved the road for the Islamic Revolution in 1979. As far as I know, this is the only film made so far that tries to depict this monumental political moment.[18]

Edward Said defines Orientalism as "a Western style for dominating, restructuring, and having power over the orient". Orientalism justifies Colonialism directly within its ideology. Colonial powers use a rally cry which aims to ‘civilize the primitive’. In the 16th century, the goal of the Europeans colonialists was to civilize the non-West, usually through the domination and restructuring of the colonized. During the famous Berlin conference of 1914, European powers divided up their African colonies into separate states, literally drawing boundaries through places that were once united, resulting in conflicts that are still taking place in todays African Nations.

The rally cry of today's imperialists is to spread "democracy and peace". There is nothing wrong with democracy, personally I believe that democracy is the ultimate form of sovereignty, but it's not our right to forcefully convert people overseas, nor was it the right for the Europeans to dominate and restructure foreign lands. The rally cries for war haven't changed, only the way in which they are expressed.

Anyone who teaches, writes about, or researches the orient is practicing Orientalism.[9] On March 22nd 2013, The Washington Post reported that according to North Korean defectors, that North Korea is a leading manufacturer in high quality Meth Amphetamines. In an official statement, the Democratic Republic of North Korea claimed that the story was fabricated.[10] The author of the article, Max Fisher, defended his work by stating that the wording of his article reads there is "good reason to suspect" that N. Korea is a leading supplier of Meth, and therefore he did not make any false statements.[11] The danger of this type of thinking often leads to international conflicts and justifications for intervention.

Quentin Tarantino's Inglourious Basterds, does exactly what every filmmaker wishes he could do, he kills Hitler. The stylistic choices of Inglourious Basterds, and Django Unchained, express the American’s perspective on their history. Not only are Americans embarrassed of their past, but they are also angry at the previous versions of  themselves.[20][21] The excessive violence in Tarantino films serves to appease the audience; Tarantino doesn't just kill the villains. He could have easily ended Django Unchained just after Leonardo Dicaprio forces the hero to shake his hand, 45 minutes earlier. Instead the audience is taken through a bloody, vengeful rampage.[22] Tarantino doesn’t just kill Hitler at the end of Inglourious Basterds, he machine guns the top leaders of the Nazi Party, then blows them up in a suicidal rampage.[23] Tarantino and the audience for that matter, take visceral pleasure in the killing of bigoted racists. The audience not only wants to watch the villains die, the audience has to be 100% certain that everyone involved is also in pieces. This is how Americans feel about the Nazi's. The Jouissance lies in the 'justly' fetishization of the death of the Nazis, a sort of infinite justice being served to war criminals who never saw 'just' punishment for the war-crimes in which they were convicted of years later.

According to Edward Said, “Orientalism is more particularly valuable as a sign of European-Atlantic power over the orient…”[24] The West is notorious creating false ‘scholarly’ reports, fabricating documents about super weapons, making sure that Westerners are well aware of how badly people are treated nearly everywhere else, fueling a sense of fascism, nationalism, and a permanent state of fear, a rally cry for war. That’s not to say that the Western perspective of the East is completely fabricated. The Orientalist media likes to display human rights abuses as if they aren’t the outlier. The movie American Sniper[25]  tells us something about ourselves. American’s are overseas killing the bad guys who kill women and children, by killing the women and children. The victims in American Sniper are referred to as "savages" in Chris Kyle's book.[26] This presents the Jouissance of the audience in American Sniper, which lies in the 'justly' fetishization of the death of the theoretical 'terrorist', a sort of infinite justice being served to 'war criminals'; for crimes they haven't committed yet. This is the power of Orientalism. It's a Western style for dominating, restructuring, and having power over the orient.

[1] Mitchell, Timothy. “Orientalism and the Exhibitionary Order” in In The Art of Art History: A

[5] Butler, Judith. “Performative Acts of Gender Constitution: An Essay in Phenomenology and